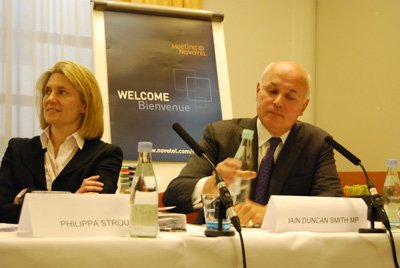 Iain Duncan Smith’s top special adviser has been awarded a peerage — on the same day that the DWP finally admitted that thousands of people have died shortly after being declared ‘fit for work’.

Philippa Stroud has been at IDS’ side for years and shares the blame for many of the Tories’ social policies. The department had fought for months to prevent release of the damning stats — at one point telling parliament that they didn’t exist:

“between December 2011 and February 2014, 2,380 people died after their Work Capability Assessment told them they should start looking for work.”

The publication of this information on the same day of the biggest on-diary political event of the summer — the dissolution peers list — is, of course, no coincidence.

This is surely the first time a department has buried bad news under an announcement including a peerage for one of their own SpAds.