The former British ambassador and connoisseur of Tashkent strip clubs Craig Murray famously stood against Jack Straw in the 2005 general election. Apparently still consumed with bitterness towards his former boss, Murray again weighed into the recent contest in Blackburn, backing an apparently “credible and impressive” independent candidate and even travelling to Lancashire to speak at an election event. True to form, Murray had identified someone with a weaker purchase on reality than himself in the form of deposit-losing embarrassment Bushra Irfan. Conor Pope’s hilarious dissection of her election leaflet is also available on his blog The Audacity of Pope.

You’re an independent candidate in a safe seat, where the incumbent MP is a minister. Your leaflet needs to make an impact, to raise your profile in the constituency.

The first thing you need to do, the absolute no-brainer, is to have your face super-imposed onto a symbol of hope that has a strong connection with the town you’re standing in. For example, if you’re standing in Blackburn, the Statue of Liberty would be the logical choice. 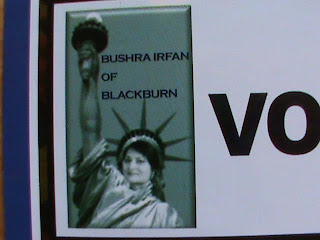 Next, you should probably have the word STOP! in big red letters above a picture of you making a gesture that looks reassuringly similar to a fascist salute. 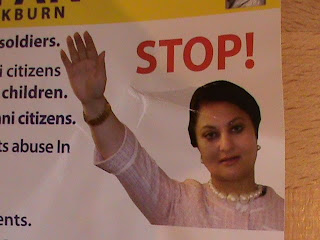 Also, have a checklist of bad things the current MP has done. Try and over all bases; accuse them of being war criminal and a murderer, but also of “being insensitive”. 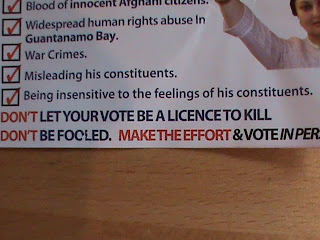 The last thing – and this is a biggie, this’ll show people you’re serious – the last thing you absolutely have to do, is get a picture of the defending MP and (this is the clever bit) mock him up like a vampire. Yeah, a vampire. Think about it. A vampire, with blood dripping from his mouth. That’ll work. 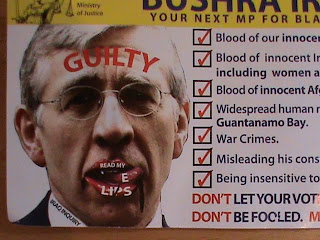 The PPC of this story is the, er, flamboyant Bushra Irfan, who was supported by the conspiracy nutjob and Independent candidate in Blackburn at the ’05 General Election, Craig Murray. Together they brought a bit of colour to the campaign. Ms Irfan stood in Blackburn this time around, polling fewer than 1,500 votes.